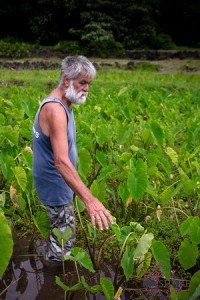 Kapahu Living Farm in Kīpahulu, past Hāna and actually located in the Haleakala National Park is a unique farm experience. Uncle John and Aunty Tweety Lind run the farm and grow mostly taro, but also other fruits and vegetables, like mango, papaya, banana, sugarcane, tomatoes and pohole (fiddlehead fern). The operation is a 501(c)(3) nonprofit with special permission from the Park Service to operate within the Park boundaries. It’s called a “living farm” because it is an educational experience where visitors learn about the Native Hawaiian culture and how they farm. You can even get dirty and learn how to work the lo‘i (taro patch).

We were greeted with the bounty of Kapahu and sat down to talk story with Uncle John (right) and Aunty Tweety.

After that, we went down to the lo‘i to see how it’s done.

Uncle John and Aunty Tweety gently stepped in (you really have to be careful—the water is shallow, but it’s impossible to tell how deep the mud is so you can actually sink in up to your hips in some spots) and demonstrated how to gather up all the weeds (anything sticking up that’s not taro), bundle them together and then slowly push the bundle into the mud and bury it.

Returning the weeds back into the mud of the lo‘i provides fertilizer for the crop and is a good non-chemical method of weed control. (Incidentally, Aunty Tweety mentioned that while they don’t use any chemicals on their farm, they’re not certified organic, so they can’t claim that term. I’ve learned through my farm field trips that the organic certification process is lengthy and financially not feasible for some farms; a better question to ask your farmer is “Do you use chemicals?” Many certified organic farms DO use them, surprise, surprise, while other farms, like Kapahu, do not, but lack the certification.)

I did this before on a third grade field trip; I’m kind of girly and not super down with the feeling of mud in between my toes, so I declined to jump in. Shake and Maui Visitors Bureau PR Director Keli‘i Brown did, though. Keli‘i (that’s him in the photo) really got into it; he said it was very therapeutic, mind-cleansing and satisfying. He asked me to take this photo to prove to his family that he really had done it. I was impressed—he cleared a pretty significant patch in a fairly short time! After the lo‘i, we sat down again and Aunty Tweety made us a pohole and tomato salad, which we ate with fruits from the farm.